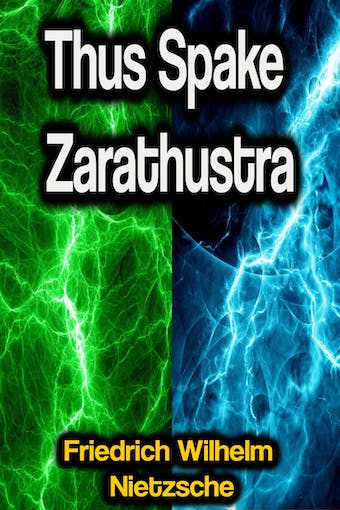 Thus Spake Zarathustra Friedrich Wilhelm Nietzsche - Thus Spoke Zarathustra: A Book for All and None (German: Also sprach Zarathustra: Ein Buch für Alle und Keinen, also translated as Thus Spake Zarathustra) is a philosophical novel by German philosopher Friedrich Nietzsche, composed in four parts between 1883 and 1885 and published between 1883 and 1891. Much of the work deals with ideas such as the "eternal recurrence of the same", the parable on the "death of God", and the "prophecy" of the Übermensch, which were first introduced in The Gay Science.Thus Spoke Zarathustra was conceived while Nietzsche was writing The Gay Science; he made a small note, reading "6,000 feet beyond man and time," as evidence of this. More specifically, this note related to the concept of the eternal recurrence, which is, by Nietzsche's admission, the central idea of Zarathustra; this idea occurred to him by a "pyramidal block of stone" on the shores of Lake Silvaplana in the Upper Engadine, a high alpine region whose valley floor is at 6,000 feet (1,800 m). Nietzsche planned to write the book in three parts over several years. He wrote that the ideas for Zarathustra first came to him while walking on two roads surrounding Rapallo, according to Elisabeth Förster-Nietzsche in the introduction of Thomas Common's early translation of the book.Although Part Three was originally planned to be the end of the book, and ends with a strong climax, Nietzsche subsequently decided to write an additional three parts; ultimately, however, he composed only the fourth part, which is viewed to constitute an intermezzo.Nietzsche commented in Ecce Homo that for the completion of each part: "Ten days sufficed; in no case, neither for the first nor for the third and last, did I require more" (trans. Kaufmann). The first three parts were first published separately, and were subsequently published in a single volume in 1887. The fourth part remained private after Nietzsche wrote it in 1885; a scant forty copies were all that were printed, apart from seven others that were distributed to Nietzsche's close friends. In March 1892, the four parts were finally reprinted as a single volume. Since then, the version most commonly produced has included all four parts.The original text contains a great deal of word-play. An example of this is the use of words beginning über ("over" or "above") and unter ("down" or "below"), often paired to emphasise the contrast, which is not always possible to bring out in translation, except by coinages. An example is Untergang, literally "down-going" but used in German to mean "setting" (as of the sun), which Nietzsche pairs with its opposite Übergang (going over or across). Another example is Übermensch (overman or superman), discussed later in this article.