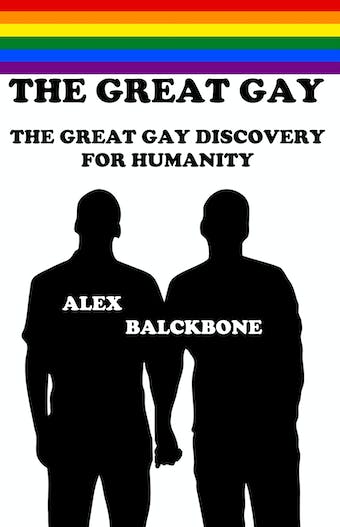 Not the psychological gay question, but the origin gay question is settled in this interesting report from a small think tank known as Our Hom, based in South Dakota, USA. Our Hom stands for Our Four Human Origin Moons.

You are invited to explore the old question of human hermaphroditism. Not the local, current biological bisexual condition, but the ancient origins of straight, gay, and lesbian trends.

Along with discovering interesting rainbow roots, a planetary past for Earth as a moon, not as a planet, emerges that begs further study simply because the distinctive characterization in precise terms of gayness is in the story of the first true solar system humans: they appear to have been hermaphrodites! We are talking an ancient solar system, and an ancient Earth. Well, it is this Earth, but when she was moon in orbit around super planet Nibiru!

Ha! Wait until you get your hands on THE GREAT GAY. This baby penetrates the reported visits of the people of another ancient moon of Nibiru: moon Heaven. So, yeah, here at Our Hom Heaven is not the night sky but a celestial body in our early solar system!

This brings us to the Heavenian gods of the Sumerian people of ancient Mesopotamia. These ancient deities were here on moon Earth. That is a proven fact. You might have had heard of them as the Anunnaki. Another proven fact is that the story of Bible/Genesis creation must be a clone of the Sumerian tablets that reported on astronomical events. That said, we see the Heavenians medically and surgically interfering with the hermaphrodites of ancient moons Venus, Mars, and Heaven to create the sexually separate bodies of Adam and Eve, where the medical and genetic procedures took place on ancient moon Earth. This brings us to our beloved LGBTQ+ community.

Why? Because everything gay started there.

The message is clear: the LGBTQ+ freedom days did not start in Chicago. They began in ancient Mesopotamia more than 6,000 years ago! The first people to be born with gay/lesbian powers were Adam and Eve.

The message continues: The Holy Bible is specific in the Book of Genesis to the incredible possibility that the first Earth humans were anatomically different than the Heavenians: “God said, let US make Man in OUR image after OUR likeness.” (Us + OUR = more than one). So, ‘the gods’ created Man in their own image, in the image of the gods (sexually separate males and sexually separate females) they created Adam and Eve; “male and female created they them.” But why say this, if that was all there was supposed to be. Unless that wasn’t the case then … and the fact had to be properly introduced … and said … hermaphrodites cut in half to make sexually separate males and sexually separate females…

But creation here means a surgical-medical procedure, not Nature or God. The human models the people of ancient moon Heaven used to ‘build Man’ already existed. It is clear that the pre-Adam-Eve humans were both physically and mentally bisexual.

The Book of Genesis is revealing ancient alien intervention. Genesis is describing (in code) medicine, surgery, and genetics. And these three disciplines combined are in turn revealing the real Straight + LGBTQ+ source!

Do not miss this. Get it now. Whether you are gay or straight, you owe it to yourself to see what our proposed take on the origin of human sexually is.

The funny thing is, if our sources are right: each gay and straight person born on modern moon Earth have been having both male and female brains from day one!

If so, regardless of your physical sexual attributes, the question of your chosen mental sexuality must be settled in your brains before age 5. Which it is. Colorfully. THE GREAT GAY guarantees it! Buy your copy now!